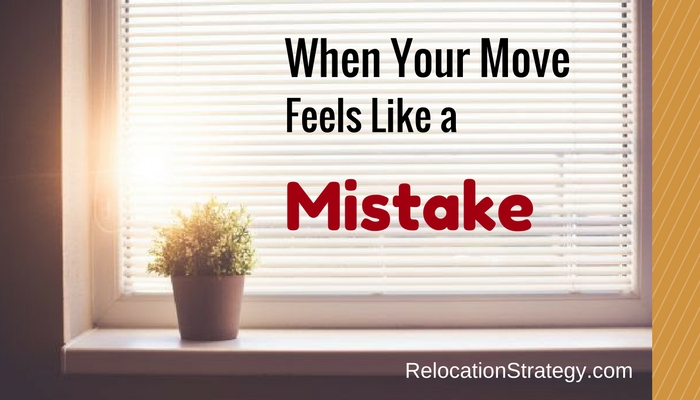 When you read about relocation, your find that moving tips tend to focus on the departure area. What should you pack? How do you start planning in advance – 6 months, 3 months, 6 weeks, 1 week … on to M-Day.

The truth is, relocation stress often starts after you’ve arrived. You just moved to a new city to take advantage of a career opportunity. Now, just a few months later, you’re writing home to say, “I made a BIG mistake.”

You realize you’re in the wrong place. It’s like landing on a 404 error page with no exit button in sight.

The truth is, the biggest expense of any move isn’t the moving van. It’s discovering you don’t fit with your new home. You end up with a lot of therapy bills and maybe you move back to where you started. Or you sabotage yourself at work (or at home) till you finally get the message: “You don’t belong here. Let’s go!”

Here are 5 tips to help.

(1) “Moving For Family” can be the best thing you ever did … or the worst?

My clients often begin a consultation with, “I want to live closer to my family. They need me.”

Typically, these people have always enjoyed time with their families. Therefore, they expect that more time will be even better. They don’t realize that living nearby will change the relationship completely.

When you visit once a year, your time together becomes a special occasion. Your family and friends schedule special trips and events. They arrange time off from work and they take time from their own community and recreational activities.

When you live around the corner, the schedule changes. You realize your favorite brother actually has activities scheduled almost every night of the week.

Don’t be shocked if you discover you love your family better from a thousand miles away. Don’t be surprised if you resent your spouse who leaned on you to move for his or her retirement, golf game or career dream.

It’s easy to say, “Well, I’ll be close to family so I’ll find a way to earn a living.” The truth is, you may not be able to duplicate a career in a different city, for all kinds of reasons.

When you resent whoever persuaded you to make the move, you will be miserable. You’ll know. Your friends will know. And all too often, your boss will know.

To avoid this mistake, expect to build your own life and make your own friendships when you move. Everybody helps you get settled the first few weeks. After that, you are on your own.

(2) Expect to wait six months to three years to feel settled in your new home.

Ignore those chirpy people who say, “You’ll feel at home in no time.” Listen to objective researchers. They say you’ll need up to three years – occasionally longer – to feel at home.

Cities, towns and regions differ widely even in the same country. Each location has its own unwritten rules and customs that you violate at your peril. When you make a mistake early in your move, you can be isolated for a long time.

At some point you may not even want to assimilate to your new home. Sometimes the culture will conflict with your own values and lifestyle. Even today, a single person can feel like an outsider in a family-oriented town. A town where everybody knows each other since high school days will not be welcoming to a newcomer.

You may be able to connect quickly when you belong to organizations – anything from a  church to a service club like Rotary to a college alumni association. Again, don’t be surprised if your new group doesn’t resemble the one you left behind.

For instance, “Elizabeth” had always been involved in animal rescue. But in her new city, the rescue group’s philosophy seemed to be doing more harm than good. She found herself feeling more disconnected when she tried to volunteer.

I’ve belonged to college alumni groups in three cities and they were vastly different. In one, I found good friends, a few of whom became  close. In another, I enjoyed the people but we connected only at meetings. And in the third, I felt alienated and eventually dropped out.

Good friendships and associations take time to nurture. When you move too quickly, you can find yourself saddled with obligations you never wanted, as we discuss in the next tip:

(3) Make short hops, not leaps, in the early stages.

If I could share just ONE idea, it would be this one.

When you’re new in town, you’re fair game. Every professional organization, club, neighborhood group and leisure activity will invite you to join. They’ll act like you’re a prize they’re trying to win.

As soon as you commit to a group — even a class — by paying dues or signing up for regular meetings, you’ll probably be treated differently. You’re no longer a prize to be won. You’re a newcomer who has to prove you deserve this membership.

Additionally, the people or groups who are most eager to connect will inevitably be the neediest. The neighbor who keeps bringing you little gifts, the group that invites you to become an officer, the friend who keeps inviting you … you may have found your potential soulmate or you may be the only person they haven’t driven away.

Avoid long-term commitments for at least 6 months – maybe even a year. When you join anything – even an informal coffee group – your absence will be noticed when you stop coming. You’ll be making a statement if you decide to do something else. In a big city it’s probably not a big deal, but in a small community, you can burn bridges.

First, the people you left behind – those who cried, “Don’t go! We will miss you forever!” – will stop returning calls. They’ll maintain the friendship via posts and tweets on the social marketing engines.

Second, the people in your new city who said, “Oh, please move here! We’d love to see more of you!” will be busy with their own lives. If you’re lucky, they will help you settle in. Then you’re on your own.

Don’t be surprised if you find yourself disconnecting from your old friends after a few months. Your interests may have diverged since you last spent significant time together. You (or they) got married, had a baby, returned to school, found a new career, or became immersed in art, comedy, animal rescue, or politics. If you don’t share your new interests, you’ll slowly grow apart.

Build your own network of friendship and support, based on where you are now – not what you would have wanted five years ago and not what your friends think would be in your best interests.

(5) Take advantage of what’s unique and special in your new home — things you’ll miss if you decide to leave.

Almost every city, town or even small hamlet has unique sights, features and opportunities you won’t find anywhere. Take full advantage while you can.

I knew a family that moved to the southeastern US – one of those states that had a deep history going back to the Civil War. They were New Yorkers and boy were they miserable! But afterwards they realized they missed an opportunity to learn about US history from some original monuments, not to mention some historical places that had no connection to the Civil War. (Moonshine, anyone?)

One of two things will happen.

You realize you like living here better than you expected. Now you don’t want to move.

Alternatively, you’ll be in a better mood, which means (psychologists say) you’re likely to make better decisions. And when you do move, you’ll carry memories of these experiences with you forever.

Most moving guides focus on helping you with the logistics and helping you pack a box. But you can’t pack your life into a box.

That’s I’ve written this guide to help you deal with the stresses and strains of relocation:
http://www.RelocationStrategy.com

Would you like to discuss your relocation as part of your career strategy?  Join me here.