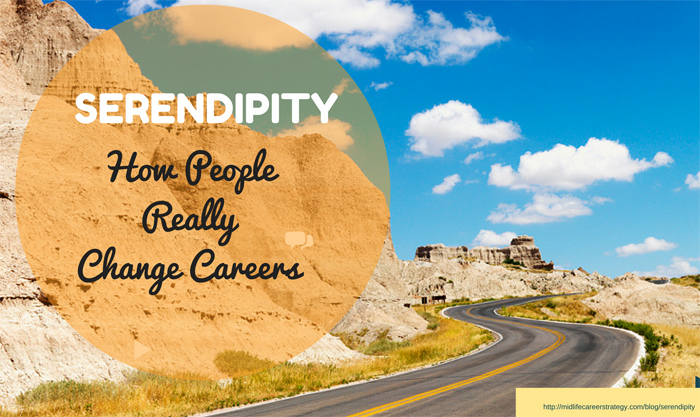 Career change often begins with a statement. “I hate my current job. I want a totally different environment. What are some steps I can take to make a move?”

Alas, many career books give a false impression. They suggest that career change proceeds at an orderly and very linear pace.

Typically, you are advised to take these steps:

Of course, an experienced career consultant will tell you this is hogwash. The best guide I’ve found is still Herminia Ibarra’s book, Working Identity.  As Ibarra explains, most career change goes more like this:

The late John Krumboltz, a wonderful career researcher and coach, recommended (as quoted in this post,  “If you don’t know what you want to do for work or you need to land a job, the single best thing you can do is to start taking actions likely to generate happenstance.”

Sounds far-fetched? Here are some examples from people I’ve known.

Brad literally fell into his career. As a child, he tripped on the choir loft of his church, landing on top of the organ. He became fascinated watching the organ repair specialist who came to fix the damage. Eventually, he became the specialist’s apprentice and branched out to his own busy career that lasted over 40 years. He loved it.

Julie graduated from law school but couldn’t find a law firm job in her medium-sized city. Out of desperation, she took a senior-level job in a bank, telling everyone, “I’ll just be here six months. I hate banking and I’m not good with numbers.” Three years later, Julie is still with the bank — by choice. She likes the job and the people. And she keeps getting raises, even in a recession.

Author Caroline Paul was working out in a gym when a firefighter recruiter came up to her. “You’re in good shape,” he said. “Ever consider joining the fire department?” She tells her story in her book, Fighting Fire.

Three Dog Bakery – a chain of retail stores with pet treats, toys, and food – grew out of Dan Dye’s efforts to get his dog to eat. The vet said, “Why don’t you cook for her?” The rest was history, and he wrote a book too.

Research on career change shows they’re not unusual. Most people owe their career choices to an unexpected event or chance meeting.

So do you have to take a fatalistic approach?

Not at all. You can give serendipity a little push.

Keep moving. Talk to lots of people. Develop confidence and radiate a positive, optimistic outlook. I’m not being woo-wooey. More research shows that we like to be around others who are confident, energetic, and upbeat. The more people you meet and the more friends you make, the more likely you are to hear the magic words, “Gee…maybe you’d like to consider our company.”

And the rest, as they say, will be history.

Have you had a serendipitous moment yourself? Write in the comments below.