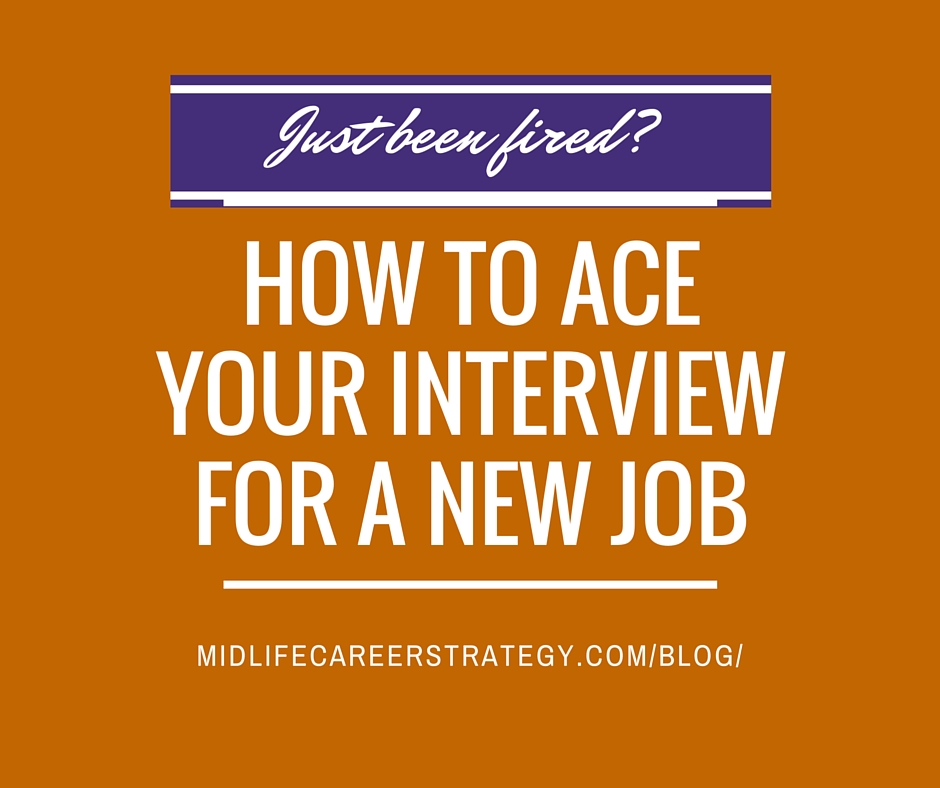 Recently I came across this question in a social media forum:

“I was just fired. How do I handle the story when interviewing for a new job?”

The questioner’s name wasn’t given, so let’s call her Felicia. And her first question was, “Can I sue?”

The truth is, most people who are fired do not have a legal claim. I’m not a lawyer so I can’t advise you. But I’d encourage Felicia to consult with a lawyer if she were…

… the only person fired and the only person of a certain age, race or gender in the work group (especially if she could document performance at least equal to her peers)

… getting bogus feedback (e.g., you’re accused of breaking a rule that doesn’t exist or doing something you didn’t do)

… had been with the company a long time, with glowing reviews, and then started receiving negative evaluations (actually you should talk to a career consultant immediately after your first negative evaluation and maybe a lawyer, too).

But for most people the issue is political and practical rather than legal and ideal. Here are some guidelines to consider.

(1) Most companies are not heartless and they don’t want trouble. They fear publicity as much as a lawsuit. Therefore, Felicia could return to her employer and negotiate a way to handle references. If her current boss is hostile, she can talk to her boss’s boss or HR.

Tip: Consider asking for a reference letter, even though most references will be checked by phone. Once something is committed to paper, people are reluctant to contradict what they wrote.

(2) Once you’re fired, or even if you’re not, often the company will say they have a policy to release only job title and dates of employment. In a small industry your boss could be reached via the informal network, but many bosses are reluctant to go on the attack.

After all, they made the hiring decision. They look bad too.

(3) During the interview, present the situation honestly, briefly and neutrally. Most career experts recommend practicing your responses aloud.

“There wasn’t a skill fit. We realized I was a square peg in a round hole.”
“My boss was new and wanted to bring in her own team.”
“We had a reorganization.”

It’s a funny thing, and I can’t explain it. But the more you prepare for a tough question, the less likely you’ll be asked about it. When you come across as confident, your outcome is likely to be positive.

(4) If you were with the company for several years, through several bosses, and now you hit a wall, you shouldn’t have to say much. It’s pretty obvious that you’re good employee and you were transferred to a department where you were a misfit.

(5) If you’re in any kind of executive or professional position most people know that firings are mostly political. So if you’ve presented yourself well and they’re eager to hire you … they’ll want to hear good things as much as you do.

Here’s the most important part:

It’s important to communicate to your new employer – very subtly – that you’re a desirable commodity. Do whatever you need to do to approach every interview from a position of strength. Keep looking till you get more than one offer.

Start your own business, even if it’s micro solo-preneurship. You may be surprised how much people earn by walking dogs or mowing lawns. Online opportunities are plentiful. Once you have another source of income, you’ll comport yourself differently.

If you’d like to discuss any aspect of your own career, let’s make an appointment.