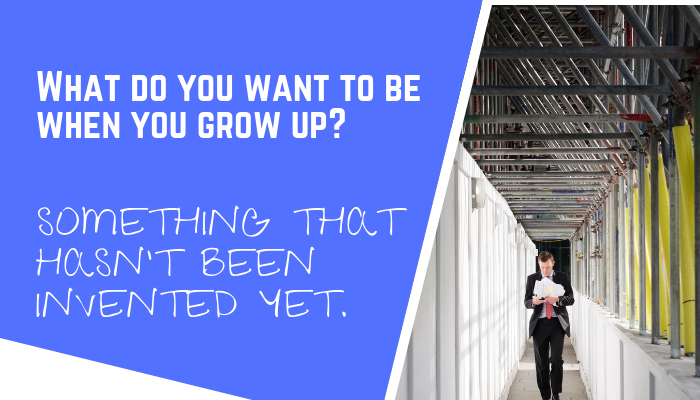 A. “Something that hasn’t been invented yet.”

Most of us were brought up to study hard, get good grades, choose a college major that would be “practical,” and strive for a “good job.” Today’s parents have trouble calmly accepting C’s on their own child’s report card. And when the child does get into college, he writes home, “I’m majoring in Byzantine art. It’s cool!”

Talk to a stranded midlife career-changer and you realize the game has changed. Yesterday’s rules prepared us to be passengers on a large ocean liner that promised a smooth voyage. Today we realize that ocean liner turned out to be the Titanic and we need to keep ourselves afloat on a small life raft if we want to survive.

When I was growing up, girls were advised to become secretaries, teachers or librarians because “you’ll always have a job.” Secretaries are obsolete. Teachers and librarians increasingly compete for scarce jobs.

Even doctors and lawyers experience career chaos. At a college reunion, I talked to my classmate Lenna,  a successful oncologist. Following a merger of medical groups, she was cast adrift to set up her own practice from scratch. And every day I meet lawyers who seek legal avenues of escape from the law.

How do you, as a concerned parent, prepare your child for a bright future? As a career coach who sees mid-career changers every day, I have learned that those who survive a stormy sea, clutching a life raft, have picked up some critical skills. Here are some tips to help your child learn not only to survive, but to thrive and grow in a chaotic world.

1. From the first day of kindergarten, encourage your child to build on strengths rather than focus on limitations.Does she spend hours studying models of cars for the last twenty years? Maybe she’ll become an auto mechanic — or maybe she’ll parlay her ability to classify detailed information into a career as a biologist or pharmacist.

2. Encourage your child to choose a field of study based on his or her natural abilities and passions, not “what will get me a job.”

Claudia Kennedy, the Army’s the first female three-star General, majored in philosophy. In her book Generally Speaking, she claims this field of study prepared her to become a top-level intelligence officer. Carly Fiorino, famed CEO of Hewlett-Packard, studied medieval history. And Michael Lewis, financial writer and best-selling author of Liars Poker, was an art history major.

3. Assure your children that few mistakes are fatal.

Did your child fail a course? Face rejection from a first-choice college? Often those who encountered obstacles are better equipped for a contemporary adult future than those who sailed through life easily. Most of us can’t avoid an occasional failure, but we can learn bounce-back attitudes as soon as we can talk.

Yolanda Griffith, WNBA basketball star, dropped out of a premier program due to pregnancy. She returned to a different college program, baby in tow, and now plays for the Sacramento Monarchs.

I once taught a student who had flunked out of junior college following a close call with the law. After a four-year stint in the US Navy, she returned to school, maintained a dean’s list grade point average, and went on to a top law school. When I found her on LinkedIn, year later, she was running her own law firm in the Bay Area.

4. Encourage your child to study but don’t panic about an occasional B or even a few C’s, as long as your child is achieving in some area of his life. Straight-A averages will be useful only for getting more school.

Getting into a top university will not guarantee success. I’ve met Ivy League graduates who were unemployed and broke. And I’ve met millionaires who graduated from schools I’d never heard of…or even dropped out after a dismal freshman year.

5. Encourage your child to experience success in any area of her life.

Did your child make the honor roll? Get selected for a play, a club, or athletic team? Win an election for competitive office? Survive a strenuous application process for a summer job? Once your child has tasted success, he will know how it feels and will act like a winner when he enters the job market.

Cecilia, a shy twelve-year-old, blossomed when she won the lead in a school play. “We want you to improve your grades, not spend time in rehearsal!” fumed her worried mother. To everyone’s surprise, Cecilia’s grades improved and she made new friends with the “good kids” who were also achievers. Most important, no matter what happens, Cecilia can return to that feeling of success whenever she gets discouraged.

I’ve met Harvard MBA’s who collected unemployment and Ivy Leaguers who had gone through bankruptcy and homelessness. I’ve met high school dropouts who flourished on their own initiative. In one small town, a couple with degrees from excellent schools dropped out to pursue artistic careers — and they clean houses to pay the bills. Recently a minimum wage job was posted by a nonprofit — and several unemployed lawyers applied.

7. Encourage your child to feel strong, free and powerful.

Career-changers who face the future with an attitude of “I can handle anything” are the ones who win today. Tossed into an ocean, they’ll improvise a set of oars and keep up their spirits till they figure out what to do next. Those who feel betrayed (“I thought I was set for life”) flounder around for weeks, months, even years.

Entitlement is over. Researchers now realize that most people find their life’s work by serendipity. Those who have a positive outlook, who can seize the unexpected opportunity, can count on reaching a safe harbor. More important, they know how to make any harbor safe and comfortable.

If you’d like to talk about your own dreams of “what do I want to be …” check out the Career Strategy Session.